Secrets, tips, tools, design considerations, materials, the "science" behind it all, and other topics related to building the cars and semi-trucks.
Post Reply
123 posts

I would suggest you educate the Inspector how to identify a lightened wheel, such as the 1.8 gram wheel. Give the inspector one of the lightened wheels so he/she can compare it to a stock wheel. The inside rim stays stock but material has been removed. The outside step is normally removed which allows the head of the nail to go into the wheel deeper then it should. A long finger nail on your little finger will be able to feel the ridge left by the machining. A car a little over weight is not cheating and can easily be fixed. Someone installing lightened wheels is not a mistake and they didn't come in the box. I know it's sad and it doesn't happen often but it does happen. It happened this year at our District race.

Just wanted to stop by and say thanks for all the advice and conversation. My daughter ended up getting 2nd among all the 27 Wolves. She also won "best looking" among her rank which was a bit surprising since it was voted on by her peers and I didn't think that many boys would vote for a glittery car that looked like a rainbow.

The best part was the first time it went down the track. Judging by the crowd reaction (a surpised "OOOhh!) I got the feeling people though her car was all about the looks!

Here's a pick of my daughter's car, the "Rainbow Racer": 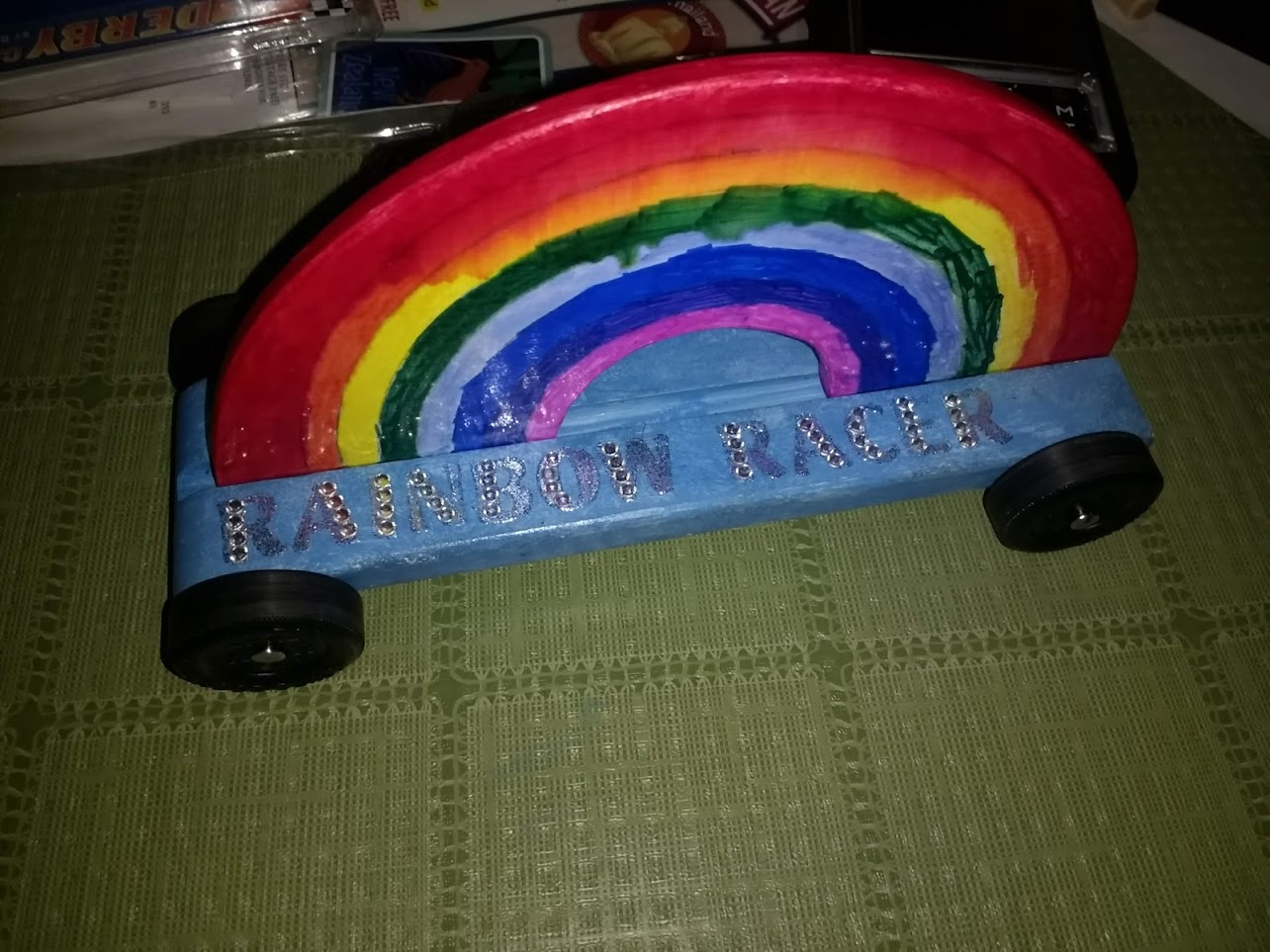 I had some extra plywood and some pink buttons so I figured I'd make her a neckerchief slide to commemorate her first pinewood derby car as well as a surprise for race day: 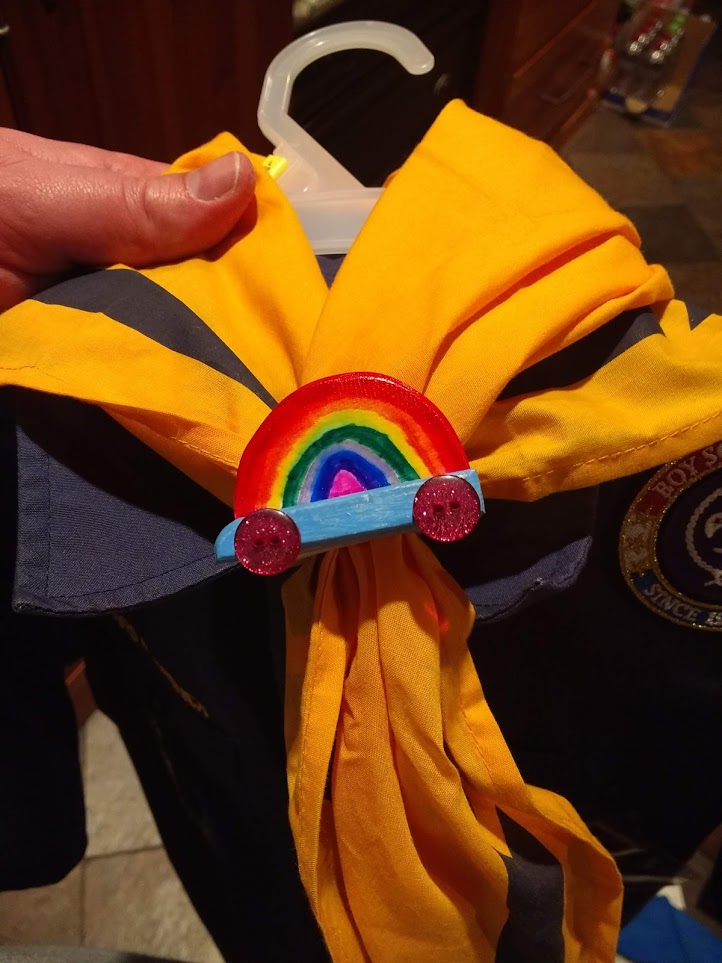 Some things that could be improved for next year
- due to the slot cut out for the 1/4" plywood rainbow, weight placement was tricky. We ended up at 2.8 oz, and bought a lead strip weight and routed out underneath. We also routed a tiny slot behind the rear axle to stuff tungsten putty into, and also did some more as far back along either side (but favoring the wheel side of the wheel that touched the track) of the lead weight to bring it right to 5.0 oz.
- I had filed off the burrs on the axles while holding them stationary in a drill, then I polished them down using wet sandpaper and superfine steel wool. I think some may have been oblong.
- I used the jig they sell to "straighten" the nail and then make the head of the nail slightly convex where it touches the wheel, but I think this process caused the nailhead to not be perfectly round, resulting on the tires rattling and sub 10 second spin time with krytox.
- We hardened the wood area around the tire with cheap clear nail polish, but after I did so I read about how we should've used super glue or "Teflon" nail polish. It seemed to be OK though, but I'm not 100% sure.

The kid already wants to build a "unicorn car" for next year. I'm thinking we'll have a slot for plywood again, but maybe we could make it so we hide some weights in the rear haunches or tail for better placement. We'll see. I just know that I want to enter a car of my own in the "expert" division next year....for our pack all the rules are the same, but you can make it 10 ounces rather than 5.

Congratulations !
Good looking rainbow car.. her pot of gold at the end of it was in taking Best of Show.


Sent from my iPhone using Tapatalk

What type of automobile can be spelled the same forwards & backwards?


This site sponsored by: